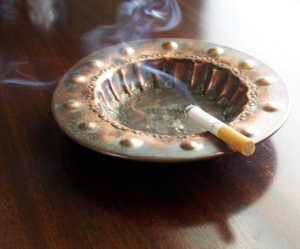 Last week I was researching material for a new book, Marie Curie.  Madame Curie, I learned, was like many very successful people: absolutely determined and stubbornly undeterrable.  Although she was not allowed to study because she was a woman and she was Polish,  she earned several advanced degrees.  She could not find a laboratory, did not have money for heat or food, and yet she performed groundbreaking experiments.

So what does all of this have to do with polonium in cigarettes? Marie Curie discovered polonium and radium.  She knew they were radioactive; she knew they could burn skin, treat cancers and kill bacteria.  But somehow she never acknowledged that her beloved radioactive elements could be harmful to her health.

Marie Curie, and her daughter Irene, died of cancer.

Millions of people smoke.  Most of these people understand in some vague way that they shouldn’t smoke, but the threat they perceive seems distant.  Perhaps if they knew clearly what some scientists and all cigarette manufacturers know, then these smokers might grasp the risk that cigarettes pose to them.

Cigarette smoke contains polonium, the same polonium that Marie Curie discovered and named more than a hundred years ago. The amount of polonium in cigarettes varies according to the region where tobacco is grown.  US cigarettes definitely contain detectable amounts.

So, when a smoker takes a good puff and inhales, along with all the other things in the smoke that might harm, there is a dose of polonium–radioactive, cancer-causing polonium.  A good long puff on a cigarette delivers that polonium directly to lung tissue.

I think that’s something people ought to know.

and through other eBook vendors