In November of 2016 I read about a symposium that addressed the challenge of educating immigrant children.  The symposium was held at the Roosevelt School District, in Roosevelt, New York.  Not long after this symposium was held, I read that research indicates children from disadvantaged backgrounds benefit from cultural enrichment.   These two bits of information were connected in my mind and from that connection grew the idea for Art Literacy.

A smaller image that helps to introduce Clementine Hunter to students:

With every picture, there is an invitation to act.  Students are asked to write a response and to create a visual work of art.  They are reminded of art’s essential nature:  It is a genuine expression of an individual’s perspective and experience.

The kinds of images featured in Art Literacy range from a Sami family (Lapland) posing in front of a traditional residence, to children playing along the seashore in Zanzibar.  Subjects covered include Stone Age cave art and NASA space missions.

There are quotes from James Baldwin, and there is poetry from Rabindranath Tagore.

The question is asked at the beginning of the book, What is art?  By the end of the book, students may be prepared to answer,  Art is a form of communication, a way for people to share their perceptions and insights.

A supplemental guide to Art Literacy has been created.  This consists of keyed sheets that offer background information on some of the covered topics.   The sheets can be copied and distributed to students who want them.

Collages introduce the five thematic sections: Animals in Art, Fantasy in Art, People in Art, Places in Art and Things in Art.  The collages are visual demonstrations of the book’s operating theme: Let imagination be the guide as experience and perception are explored.

A representative collage, from the section entitled Fantasy in Art, is shown below: 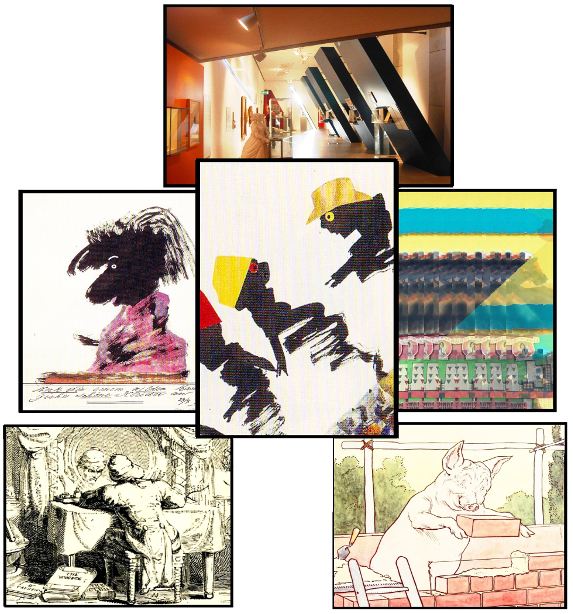 Art Literacy is for sale on Amazon.  However, the long-term plan is to set up an apparatus through which the book and accompanying material can be distributed, at no cost, to students.

I met Max when he already had achieved a certain notoriety. It was incongruous to me that the peaceful, soft-spoken man I beheld could be the cause of controversy. But it was exactly his peaceful nature that gave rise to offense.

Maxwell Corydon Wheat Jr. was Poet Laureate of Nassau Country, New York. This is the sort of honor that usually attracts little attention, outside the poetry community. But that’s not how things worked in Nassau County.

The County Legislature decided Max was not worthy to be Poet Laureate, because he had written a book about peace in a time of war.

Max’s nomination was rejected. This slight suggested that, not only did the bureaucrats know little about poetry, but they also had a poor understanding of poets.

The poetry community dismissed the dismissal. They crowned their laureate, who had earned his title through acclaim and accomplishment. Hence, Max, a quiet, slight figure with a steady gaze, became the center of controversy.

Max was my teacher. He led a group of Taproot writers. That’s what he called all of us, no matter our skill level: everyone was a poet and everyone was a writer. Over time, this proved true, to varying degrees, for those who persevered under his leadership.

Each voice in the group was given a moment in the spotlight, and each was respected. The only exceptions to this rule were when voices were raised in hatred or anger. Neither of these sentiments survived long in a group led by a man of peace.

Max held his sessions in the fall and spring. When time came to sign up for a session, I’d go down the first day I was allowed. His class was so popular that it might be oversubscribed and I’d be shut out. However, there was little danger of that. Though the door might be officially closed to late entrants, I can’t recall a time when Max turned someone away.

There was, for example, the day a distracted woman wandered into our room. None of us knew her. She was looking for another event and accidentally stumbled upon our class.

A chair was empty, so she sat down. She even joined in the discussion, as I recall. Max didn’t suggest that she was unwelcome, or in the wrong place. When she left, he didn’t chuckle derisively, as some might have been tempted to do. We took our lead from his behavior, as we always did.

That episode captured Max’s strength, and his character. He filled the room with grace, the grace of kindness and generosity. And he had the strength to enforce this environment, by example, and by instruction, when necessary.

I learned to write under Max’s tutelage. Before I entered his class, there was so much I didn’t know. He never let on, as I floundered in those early days. My confidence grew and his lessons took root. It is rare that I write a piece now, and Max’s hand is not on it.

There was a time when I had little patience for poetry. It seemed a self-indulgent art with little objective value. I still don’t write poetry, despite Max’s best efforts, but my ears, my eyes and my heart are open to it.

For the last few years I’ve been writing nonstop–books, blogs, reviews. There is a sense of time running out, but there’s more than that. Max helped me to find my voice and to develop the belief that I can do it, that my effort is valid.

Thank you, Max, for everything. You were an artist, a peacemaker and a teacher. You are missed.

Molds can be broken. Sometimes it’s by accident and sometimes it’s deliberate. In the case of Mr. Chapman’s poems/piece/essay–the rupture is definitely deliberate. His selection and arrangement of words in Complete Nonsense is almost like a Rorschach test that either disguises intent or bares the psyche. I think, for Mr. Chapman, the latter may be true–although he is clever, clever enough to create a maze that leads nowhere.

There is nothing unrestrained about Mr. Chapman’s utterances. His discipline in stringing together seemingly unrelated terms in a splatter is a little like Jackson Pollock’s spilling paint on a canvas. Did Pollock toss paint willy nilly, without thought or plan–or did he attempt to create a unified whole? Do Pollock’s and Mr. Chapman’s apparent randomness reflect chaos?  Or is their work an exploration of associating and disassociating elements?

It appears that central concerns of Mt. Chapman’s psyche are laid bare here–of course that may be a ruse. Some sections in the piece might be unsettling to a subset of readers. Scatological references abound. If this is a portal into the subconscious, though, Freud would say this is to be expected.

There is no way for me to recommend or not recommend Mr. Chapman’s work to a general audience. I don’t think it’s intended for that audience. Certainly, I can’t quantify my opinion with a star system. Mr. Chapman achieves what he set out to do. He breaks a mold. But this is not what most readers expect to find in an Amazon highly rated work.

However, I do give Complete Nonsense a qualified endorsement. If you are interested in language and in exploring the different ways language may be used, then read this book. Mr. Chapman deftly manipulates words, or parts of words. What he has done deserves the attention of intelligent readers.