On June 27, 1950 Harry Truman ordered American forces into South Korea. The purpose of this action was to help repel North Korean troops that had crossed the 38th Parallel. It would be two and half months before significant reinforcements would be sent to buttress the small American contingent. By the time these fresh recruits arrived, the hero of this book, Private Philip Thomas Hughes of the 19th Infantry, 24th Infantry Division, had fallen. His demise came just three days before the U. N. intervention and a mere twelve days after his eighteenth birthday. The Battle of Turkey Thicket, by Christopher Russell, offers insight into the chaotic early days of the Korean War and provides an explanation for how young Philip Hughes found himself at the front line in a war for which he, and the United States, were poorly prepared

In writing this book, Russell has done a service to every soldier who ever fought in war. The details of Philip Hughes’ life are often murky. This was a boy who was not born to advantage. He was orphaned as an infant and sent to live in an institution. At the age of two, he was adopted. From the account of this book, it seems that the circumstances in that adoptive home were not conducive to a happy childhood.

Philip, and his brother, Frank, ran away in 1949, when they were teenagers.   After that, neither boy was welcome back home. They ended up in a reformatory, though they had not committed a serious offense. Their mother simply found them to be unmanageable, so she turned them over to the state. Under the circumstances, the military seemed like a reasonable option to Philip. The country was not at war, he would have the opportunity to travel, and he would receive training. His mother did not object.

Philip was sent overseas, to Japan, where U. S. Occupation forces were supervising Japan’s post-WWII transition. It was while he was in Japan that the North Korean incursion occurred. Philip and other soldiers stationed in Japan were sent into combat. These soldiers were not seasoned fighters. Battlefield equipment was left over from WWII and it was not in great shape. Supply transport for the soldiers in the field was haphazard. The troops were cold, hungry and sometimes actually lost in the rough South Korean terrain. Clean water was in short supply, sanitation was “abysmal” and medical care was substandard. According to Christopher Russell, “During the first year of the Korean War, 60 percent of U. S. troop evacuations were disease related.”

Russell has ably managed a difficult task in writing this book. He has researched the scant details of Philip Hughes life and has noted when sections of the book are not supported by the record. Much of the narrative is derived from extrapolation or third person accounts. Russell does not blur the line between what he knows for certain and what is likely to have happened. As a result, the reader is grateful that the story as told can be relied upon.  Still…there is a desire to know more about the young soldier. To Russell’s credit, he does not give in to the temptation to fill in the blanks with a faux account.

I wish everyone would read this book. The Korean War is largely forgotten in the United States, although Korea is much in the news these days. Millions of civilians were killed or wounded during the war.  Hundreds of thousands of soldiers fell in battle.  Approximately 36,700 of the fallen were American.  And yet, the fallen, to many Americans, are a minor footnote to history. Christopher Russell’s book reminds us that the lives of the fallen matter, and that their sacrifice should be honored.

The Battle of Turkey Thicket is the story of an orphan, of a soldier, of an American War. I highly recommend this book.

As North Korea continues to refine its ballistic missile technology (http://www.aljazeera.com/news/2016/06/north-korea-test-fires-musudan-ballistic-missiles-160622042047390.html), it warns that the missiles will be armed with nuclear weapons. Until last January those weapons would have been atomic bombs.

In January, North Korean leader Kim Jong-un announced that his country had tested a hydrogen bomb (http://www.bbc.com/news/world-asia-35240012) .  This was alarming news to the international community. While most people vaguely refer to “nuclear weapons” they draw little distinction between atom and hydrogen bombs. In fact, there is a significant difference, such a great difference that many scientists who worked on the Manhattan project (to create an atom bomb in WWII) refused to have anything to do with hydrogen development.

A look back at those early days of atomic weapons development will help to explain why North Korea’s hydrogen bomb is such a big deal. What follows is an except adapted from What is Radioactivity? The Basics, one of several books offered by Rhythm Prism that help to make complex ideas accessible to all readers.

Edward Teller and the Hydrogen Bomb

When Henri Becquerel and the Curies experimented with radioactivity in the late 19th century, they didn’t have government or institutional support. Interest in radioactivity grew quickly, however, as its potential uses, particularly its military uses, became clear.

By the 1930s, a race to build an atomic bomb was on. The race culminated in nuclear blasts over the cities of Hiroshima and Nagasaki.

The display of power stoked the desire in some for an even more destructive device. A chief advocate for the new bomb was Edward Teller, one of the physicists who had worked on the Manhattan Project. The device he envisioned was the hydrogen bomb.

Teller’s nuclear device would gain its power from fusion, rather than fission. Fission involves breaking up atoms. Fusion involves combining them. Both processes release a tremendous amount of energy, but fusion releases much more.

Fusion diagram: Two isotopes of hydrogen are forced to combine and become a new element, helium. An extra neutron is freed in the reaction. 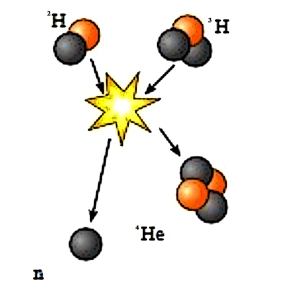 Many of Teller’s colleagues, including Enrico Fermi and J. Robert Oppenheimer, did not believe the hydrogen bomb should be developed.

“Now I am become Death…” Oppenheimer had said, when the atomic bomb was first tested on July 16, 1945. This sense of Promethean overreach did not affect Teller, however. He thought the U.S. needed bigger, and more powerful bombs.

The disagreement between Teller and Oppenheimer grew so fierce that Teller left to work on the hydrogen bomb and Oppenheimer eventually (after WWII) became an activist in the anti-proliferation movement.

Teller persuaded Harry Truman, who had approved the bombing of Nagasaki and Hiroshima, to go ahead with development of the hydrogen bomb. That first bomb, the Teller-Ulam hydrogen bomb, was tested on November 1, 1952.

The hydrogen bomb actually uses both fission and fusion. Detonation is a two-stage process. The first is a fission trigger. The tremendous heat generated by fission causes the second part of the bomb to activate. In this second part, deuterium and tritium are fused. In building a hydrogen bomb, Teller, in fact, mimicked the power of the sun, where hydrogen atoms fuse together to make helium.

Ultimately, the United States entered into an arms race with the Soviet Union. Both nations worked feverishly to amass thousands of the most powerful weapons on earth. Of course, many believe the irony of the weapons race and the nuclear age is this: if atomic warfare ever broke out the result would likely be catastrophic for everyone. With the hydrogen bomb, the path to Armageddon would just be a little shorter.